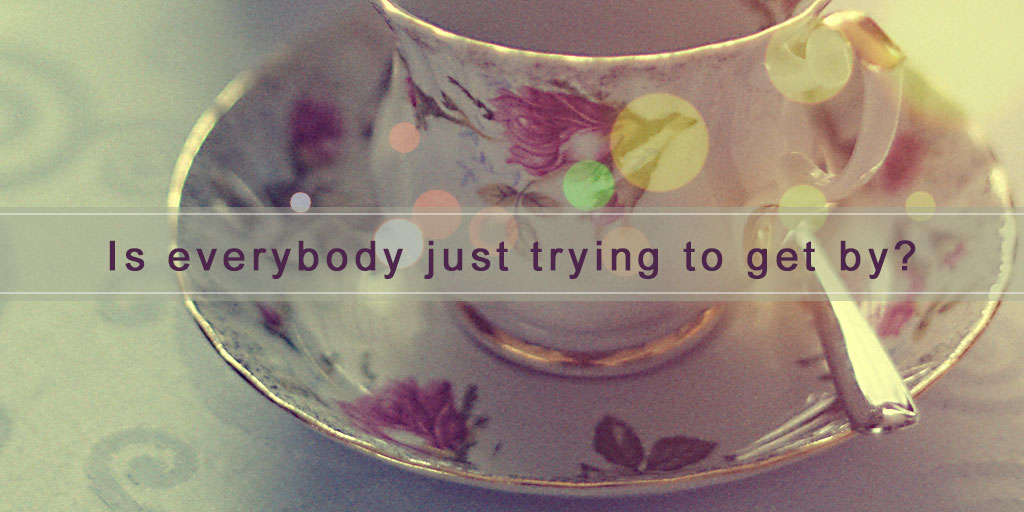 Suppose you won the lottery. It was worth $5 million. And suppose at the time you were working in a dead-end job selling home security systems door-to-door. And further suppose you had maxed out your credit cards and your  twin daughters were getting ready to go to college. Fast forward six months. You have quit your job and are now day-trading from home. There’s a Cadillac Escalade in the driveway, parked next to your thirty-foot cabin cruiser, and your daughters are well-ensconced at Yale. You’ve got it “made in the shade”, right? No problems, no worries. Nothing but clear sailing ahead.

Meanwhile the rest of us sit on our couches in our modest homes and watch all the movie stars prancing around in their mansions on Entertainment Tonight and say to ourselves, “Damn, they’ve got the world by the tail”. Tiring of that insult, we turn on the news only to see more stories about billionaires who are contributing huge sums of money to hospital wings, college libraries, Save the Whales, and political campaigns. Again, we say, “Damn, that’s not fair. Why should I have to worry about bills and mortgages and the fate of Social Security and they don’t?”

And then we’re invited to a fancy wedding. All the beautiful people are there. Lots of smiles, lots of suntans, lots of size four, lots of perfect, pearly white teeth. He’s got on an Armani suit and you’re in your standard blue blazer and grey slacks. She’s wearing Versace and you’re in Ann Taylor. You’re afraid to check the time on your Timex watch when he’s standing next to with his Bvlgari Diagono Chronographer. Gosh, they seem happy and everybody wants to talk to them or get their autograph.

We kind of figure everybody’s got it better than us, where did we go wrong, and we rush out and buy… yet another lottery ticket. What we don’t know is that the woman wearing Versace is fighting ovarian cancer.

The reality is, no matter what our station in life, no matter what our notoriety, everybody’s just trying to get by. If a person is a son-of-a-bitch before they make their first million, there’s a heck of a good chance that they’re still a son-of-a-bitch on their last ride to the cemetery. If they’ve always had childhood issues, if they have low self-esteem, if they’ve carried personal baggage and old tapes around with them for the first forty years of their life, they’ll be carrying those burdens for the last forty as well. Behind the gilded shutters on their boardroom-sized master bedroom suites, all the vagaries of human existence afflict the rich and famous as much as they afflict us.

Do we really think Donald Trump (with his Towers and his Trophy bride and his golden Toupee) is happy? Odds are real good that deep, down inside he’s miserable; just trying to assuage his demons by running for President. If movie stars have it so good why did Robin Williams and Heath Ledger and Phillip Seymour Hoffman, to name but a very few, recently commit suicide. Certainly those three actors must have had the world by the tail. Yet the trail of the mega-rich in the arts and music and entertainment who prematurely caused their own death is littered with too many bodies to recall. Even George Eastman, with all his wealth and far-reaching accomplishments must have been struggling with life’s many imperfections when he penned in his suicide note, “My work is done. Why wait.”

To be human is to suffer. Theodore Roosevelt pined that “only in death is there no suffering” and Woody Allen, in his melancholy way, assured us that “life is full of misery, loneliness, and suffering – and it’s all over much too soon.” Everyone we meet bears a burden. Yet we are often hesitant to talk to apparently successful people, like CEOs and politicians and movie stars, because we think certainly they have nothing in common with us, what could we talk about, and certainly their excremental functions don’t stink. A women once gushed to Itzhak Perlman, the great violinist, “Mr. Perlman, you’re a genius.” He answered, “Thank you, but before I was a genius I was a schmuck.” Alas, we are all imperfect under the skin and our similarities are more numerous than our differences. When the Green Bay Packers of old were about to play a formidable opponent, Vince Lombardi always reminded them that the opposing players were just human and that “they put their pants on one leg at a time, just like us”. The truth is we can take considerable comfort with whatever our lot in life is knowing that everyone – saints and sinners alike – are all just trying to get by.

Have you ever been intimidated by a rich person?