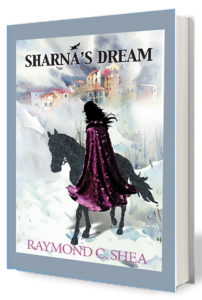 Imagine a world in which the outcome of war can be controlled by people’s thought patterns. Or where such patterns can control violence and depression. Or hope and despair. Sharna’s Dream is an Eckhardt Tolle allegory. A clear and significant message is embedded in its pages. The message is simple – change your thinking, change your life. Sharna’s Dream is a story of the pursuit of an impossible goal, in the J. R. R. Tolkien tradition. Sharna is the daughter of a deposed king who returns to her former kingdom of Esira after ten years in exile, set on avenging her father’s death and retaking her kingdom – by any means. Her adversaries are creatures called the Moleteg, creatures that live underground and are obsessed by personal power and the accumulation of possessions. After several failed attempts, she enlists the aid of a mysterious Traveler, and together they are able to change the kingdom’s mindset and finally defeat the enemy.