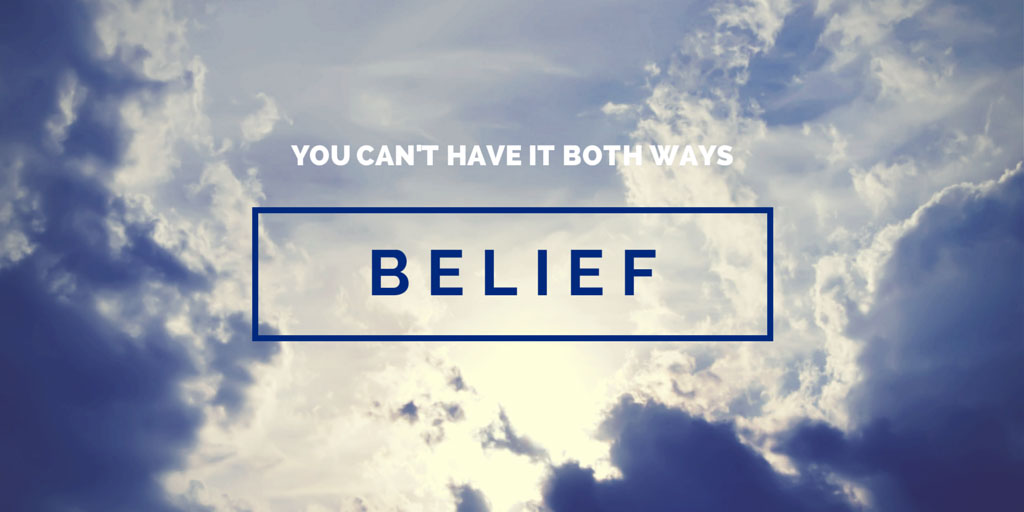 People say they don’t know if they really believe in God. Those who do believe, say it has nothing to do with knowing. They say, rather, it is a leap of faith. A leap. Of faith. But what exactly is a leap of faith? When, searching for the Holy Grail, Indiana Jones in the Last Crusade closed his eyes and took a most trustworthy step into the abyss, we all cheered. And then, I suspect many of us secretly wondered whether we could do the same thing knowing that Harrison Ford works on a movie set and we don’t. Faced with the same unsurpassable abyss in real life, how many of us have that degree of certainty, that level of belief, to put everything in the hands of our God and step out into what would be certain death, if we’re wrong?

Is it that believers don’t fear death because they have been taught that it is only in death that they can be truly reunited with their God? But then, who did this teaching? What’s its genesis? Other believers? If so, one has to question the origin of this truism. Is it man-made or is it divine? But then isn’t the first instance of anything often referred to as the God Particle? The thought process in this teaching or belief system then becomes a bit circuitous.

The concept of small and large also seems to come into play here. People say that when they stand before the ocean they feel small. Or when they stand on a mountain top they feel small. Or when they look at a centuries-old giant redwood they feel small or insignificant. Can we conclude from that that small is bad and big is better? Or is this whole ocean/mountain/tree perception just a matter of self-esteem, or lack thereof? So what if the mountain is bigger or older or wiser (if your into anthropomorphism); if one is secure in one’s own self-worth why does size or age have to make us feel competitive with nature’s marvels? It seems likely, however, that size or vastness or incomprehensible scope often diminishes our sense of self-worth and may even cause a wholesale re-examination of our entire value system. And because of that, it’s been said that people need to feel like they are part of something larger than themselves. If this is so and the need is sufficiently strong, did mankind then invent a concept larger than the individual human self to which people can attach themselves to avoid the debilitating feelings of insignificance and loneliness? Did man inadvertently invent God?

Or is it more than the need to avoid loneliness? Are humans hard-wired to feel the need for connectedness? Are we synergistic creatures who actually operate better when the power of two or four or forty comes into play (like wolves that hunt in packs or a platoon that fights a battle or a football team that wins because of its unity). The history of civilization is replete with the societal tendencies of humans. Whether hunting in tribes or tailgating for our favorite team or the band of brothers at the police precinct, it may be alleged that we are better together than we are alone. We wear team apparel and shake pompoms and sing national anthems and put on all manner of uniforms in order to demonstrate our connectedness to others. Is the connectedness need that strong? Maslow’s Hierarchy would suggest this is so.

Is God then the uber-mascot or cheerleader, who can rally the troops better than anyone? Do we believe in Him because we need to believe in Him, simply because of our socially-oriented genetic code? Do we aspire to be like Him or do we just want to make sure He’s on our team. Both athletic teams pray before the big game for God to help them annihilate the opposing team. To which team does God listen? Is He a big sports fan, with a Wisconsin or Syracuse or Notre Dame emblazoned on His chest?

And what do we say of all the wars and all the deaths and all the persecutions that have taken place under the guise of religion?

Still, when confronted with a perceived evil that overwhelms us because of its sheer egregiousness or incomprehensible scope it is comforting to reach out to someone (or something) outside ourselves for assistance. That is, reach out to someone or something we deem as greater and more powerful than ourselves. “God help us” we intone, or perhaps less personally, “Heaven (or the universe or the cosmos) help us”. And having made that prayer, do we not feel somehow comforted and, to a degree, more capable or powerful.

As they say, “Are we just whistling Dixie” here? Did someone hear our prayer? Is help on the way? Has a greater power than ourselves become our “rod and our staff”? And what if we don’t see that help manifested in ways we can understand? Are we not told that “the Lord works in mysterious ways”.

Perhaps the most questionable affront of all is to be told that we mere humans have such puny and limited mental capacities that we can never expect to understand the ways of God. In the next breath, however, we are told that man has been made in the likeness and image of God. Interesting. Human logic (puny as it is) should remind us that epistemologically you can’t have it both ways.

Do you believe in God or some facsimile of a power greater than yourself? The arguments above notwithstanding, perhaps we should. Mankind’s ways haven’t exactly worked out so great for us during all of human history; maybe it’s time to give a more spiritual approach to our worldly affairs a fair try.

Point to Ponder: What do I believe in?

Question to Consider: What circumstances have caused you to ask for help outside yourself?

One thought on “The God Particle”